Skip to content
On the biggest and most innovative ship sailing Europe, you’ll experience not only the classic must-see cities, but also 7 unique neighborhoods onboard, with new family experiences added from bow to stern only on MSC Cruise.

Building on her sister's ships success, MSC Grandiosa offers even more public space than her sister ships, along with a series of exciting innovations. Cirque du Soleil at Sea has created 2 brand new shows exclusively for MSC Grandiosa, which you can enjoy in a high-tech lounge while savoring a superb culinary experience. And if you choose the Aurea Experience, you’ll appreciate the pleasures of flexible dining and unlimited drinks in a dedicated restaurant.

Depart 6:00 PM
Barcelona is considered the cosmopolitan capital of Spain’s Catalonia region and is known for its art and architecture. It is a Mediterranean city with Roman remains, medieval quarters and the most beautiful examples of 20th century Modernism and avant-garde. The fantastical Sagrada Família church and other modernist landmarks designed by Antoni Gaudí dot the city. The mazelike Gothic Quarters are the testimony of the city’s medieval roots. Marseille, France

Marseille is an old town with a history of 2600 years of being a port town. It’s recent rise in the tourism sector has put focus on the port which has been in business since last two decades and more. The most stunning feature of Marseille is its southern and eastern suburbs, they brush up against an area of exceptional natural beauty. There is a lot of cultures and communities to explore in the city which was declared European Capital of Culture in 2013.

Birthplace of Christopher Columbus and the European Capital of Culture in 2004, Genoa is Italy’s largest sea port. Rich in art and heritage, Genoa is bustling with piazzas and excellent gastronomical fare. The old city reminds you of the pre-modern life, with a lot of old streets still intact and gives a vibe of slow yet active town.

Naples is one of Europe’s largest and oldest cities and has immense beauty, history, landscapes and attractions to woo a traveller. The city is chaotic, contradictory, full of surprises and intense. Its age old culture clashes with the modernity of today’s era and yet both co-exist. There is a lot to do and see in Naples and a stop here takes you back to the bygone era and yet you feel grounded by a sense of modernity to the place. We did say it was contradictory!!Messina, Italy

A popular cruise port, Messina is a well-protected natural harbor and is the main portal to Sicily. The port enjoys favorable climate throughout the year, its art and culture reflects of various invaders who later settled in the city. The thriving town is close to mainland and its existence has a flavor of its various inhabitants through many centuries.

UNESCO has titled Valleta as, ‘one of the most concentrated historic areas in the world’. It is quite an achievement for a city which was built by the Knights of St. John and is considered a masterpiece of the Baroque. The city is bustling with activity in the morning but has a quiet and timeless appeal in the night. Rich in heritage the city is also called a European Art City.

While on sea one gets time to explore everything that is on offer. Also, there is an increase in activities and entertainment as everyone is onboard and they are ready to get into some fun. There are trivia, contests in the casino, afternoon shows in the theater, musical entertainment, poolside activities and even special classes not offered on other days of the cruise. One can either participate in these activities or decide to sit by the pool, or go for a spa or just sit and explore the whole atmosphere.

The ship arrives back at Barcelona 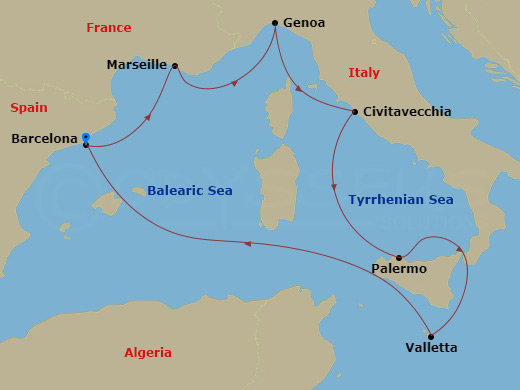 Any questions related to The Brand New MSC Grandiosa?